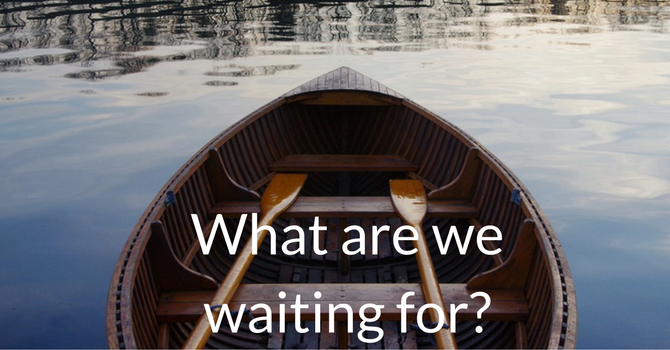 I spent my childhood summers at a cabin on a lake. Most days, usually shortly after dinner as a late summer afternoon was drawing close to evening, someone would announce: “I’m going fishing”. The proper response was always, “I’ll go with you”. If we were really on the ball, someone else would add, “And also with you”, thus mixing scripture and liturgy quite nicely.

Sometimes the person who had announced they were going fishing had company out on the lake that evening, and sometimes they didn’t. It didn’t really matter one way or the other. It was the proper response that mattered. This is what passed for biblical literacy in the Mix household.

Why do people go fishing?

I suppose, on the surface at least, we hope to catch something. Sometimes we do, and sometimes we don’t. Rarely does not catching something ruin what is usually otherwise a perfectly enjoyable time out on a lake, enjoying beautiful surroundings and losing ourselves, if only for a little while, in our own thoughts and company. As the saying goes, “Give a man a fish and he will eat for a day; teach a man to fish and he will sit in a boat on a lake and drink beer all day.” There’s a lot of waiting involved when we fish, and sometimes that waiting is part of the reason to go.

One evening almost 2000 years ago, Peter said that he was going fishing. It seems to me that it wasn’t so much an invitation as a declaration – I’m not sure if he cared that much if anyone responded or even came with him. Peter needed something – anything – to do. And what he decided to do was go fishing.

Why did Peter go fishing?

Matthew and Mark both tell us that shortly after Jesus began his ministry, he was walking beside the Sea of Galilee when he saw two brothers, Simon, called Peter, and his brother Andrew, casting a net into the lake. Jesus said to them, “follow me”, and at once they left their nets and followed him. A little farther along, Jesus saw two other brothers in a boat with their father Zebedee, preparing their nets to go fishing. Jesus called out to them, and they immediately left their boat – and their father – and followed him.

Luke’s version of the story includes an intriguing detail, but let’s leave that aside for the moment.

In today’s Gospel reading, Peter, the two sons of Zebedee, Thomas, Nathaniel, and two other disciples – one of which was John, the person telling us the story – were gathered together. A small group of believers in Jesus keeping each other’s company.

Jesus had told these very same people he would make them fishers of men, but at the moment, that doesn’t seem to have worked out too well. The small gathering we read about today has a whiff of aimless desperation about it – a sense that the disciples were at loose ends. Their lives had been turned upside down three years before when Jesus called out to them on the shore of a lake. The very same lake, as it happens. Now they were leaderless and heartbroken. Jesus had come, and gone, and had come to them again, and then seemingly left them again – and for what? What were they supposed to do now?

So Peter decides to go fishing – to return, perhaps, to something that would give him, at least for a little while, something to do. Or maybe he needed time to be quiet with his thoughts – to make sense of all that had just happened to and around him. Maybe he just wanted to go back to how thing were before Jesus came into his life – just get back to “normal”.

Like their gathering, their fishing has a whiff of desperation about it as well. They fished all night without catching anything. I usually give up after an hour or two, but the disciples seem to have been singularly focussed on catching something, anything. If only they keep at it, maybe normal life will return and they will be fishers again. Everything will be as it always was before everything changed.

So they wait, and they fish. And they fail.

As morning came, Jesus stood on the shore and called out to them. It’s the sort of greeting anyone who has fished has asked or answered many times: “caught anything?” This question, however, is a little different. By his phrasing, Jesus lets them know that he knows that they haven’t caught anything at all.

He suggests they try something different. “Throw your net on the right side of the boat and you will find some.” It’s at this moment that Luke’s version of Jesus’ first call of the disciples comes back to mind: Luke tells us that that first time, too, the disciples had fished all night without luck. Jesus told them to let their nets down one more time, and when they did, they caught so many fish that their nets began to break. Simon Peter’s reaction at that time was to fall at Jesus’s feet and beg him to leave him alone, because he was “a sinful man.”

This time, they again do as Jesus suggested, without even knowing who’s instructions they are following. And again, they catch fish – many, many fish. But their net does not break this time. And Peter – God bless Peter, always a man of action: the one who tried to walk on water, the one who pushed past John and rushed into the open tomb – Peter reacts again. But this time his reaction is to jump into the water and speed toward Jesus as fast as possible, not beg him to leave. The rest of the disciples are left to row the boat – with the heavy load of fish – back to shore without Peter’s help.

And when they get there, they find Jesus on the shore, standing by a fire with fish and some bread.

Peter had stood by a similar fire only a few days before, in the High Priest’s courtyard. It was there he denied knowing Jesus three times. Now Jesus invites Peter and the others to join him around this fire. He feeds them breakfast – something, please note, that they had been unsuccessful in supplying for themselves. And, of course, there is plenty left over.

And the disciples find themselves waiting again – not for fish this time, but for Jesus to speak.

We know what happens next. You get the feeling that even Peter knew what was going to happen next. This part of the story is often referred to as “Jesus reinstates Peter”, or some similar title, and it is easy to think that it was simply Jesus sticking it to Peter before commissioning him to build his church. Certainly the three-fold questions mirror Peter’s previous three-fold denial.

And then the responses: Peter’s confessions of love, and Jesus’ replies. If, as you say, you love me, then “feed my lambs”, “take care of my sheep”, “feed my sheep.” Tend my flock – look after that which belongs to me. This is the language of discipleship, to be sure, but it is also the language of stewardship: look after that which belongs to someone else, because it is the right thing to do – because it is asked of you. And it may cost you to do so: Jesus tells Peter that it will come at high personal cost, indeed, the highest personal cost.

Peter, always a man of action, stays true to character: but what about him? he says, pointing to John, the storyteller. Why do I have to do this? Why not someone else? At the very least, Jesus, tell him to pitch in a little.

Jesus bats the objection away. What is it to Peter that someone else may be asked to do something different, or even asked to do nothing at all? As for you, “follow me.” Such a simple directive, the very same words Jesus said in the very same spot three years before, but now with a more specific job description: feed my sheep, look after my flock. Be my steward while I am gone.

We know that Peter listened, and learned, and followed Jesus. But what does following Jesus look like? In the Epistle reading today, Paul tells us to “value others above ourselves, not looking to your own interests but each of you to the interests of the others.” Peter himself also tells us in his first letter to the young church to “offer hospitality to one another without grumbling.... [using] whatever gift you have received to serve others, as faithful stewards of God’s grace in its various forms.” And to those who are leaders, Peter adds, “be shepherds of God’s flock that is under your care, watching over them—not because you must, but because you are willing.” And Peter would also be the first to remind us that being shepherds of God’s flock sometimes – perhaps often, maybe even always – has a cost attached to it.

We may sometimes feel like that small gathering of disciples felt, at loose ends, uncertain of ourselves, waiting for someone to speak up and offer a suggestion, or even an invitation, of what to do next. Here at St. Philip’s, we’ve been waiting for a while now for new leadership, new direction, new certainty. We may even sometimes wish that everything would just go back to “normal”, the way it always was before change intervened. Perhaps there’s even a whiff of desperation around those things we’ve always done and continue to do. Maybe we even feel as though what we’ve always done isn’t even working anymore.

There is work to do if we choose to follow Jesus – there are lambs to feed and sheep to tend. Jesus calls all of us who follow him to be stewards of his flock. Not because we must, but because we are willing. Because we love him, and because he loved and provided for us first. It’s how we respond that matters.

So... what are we waiting for?