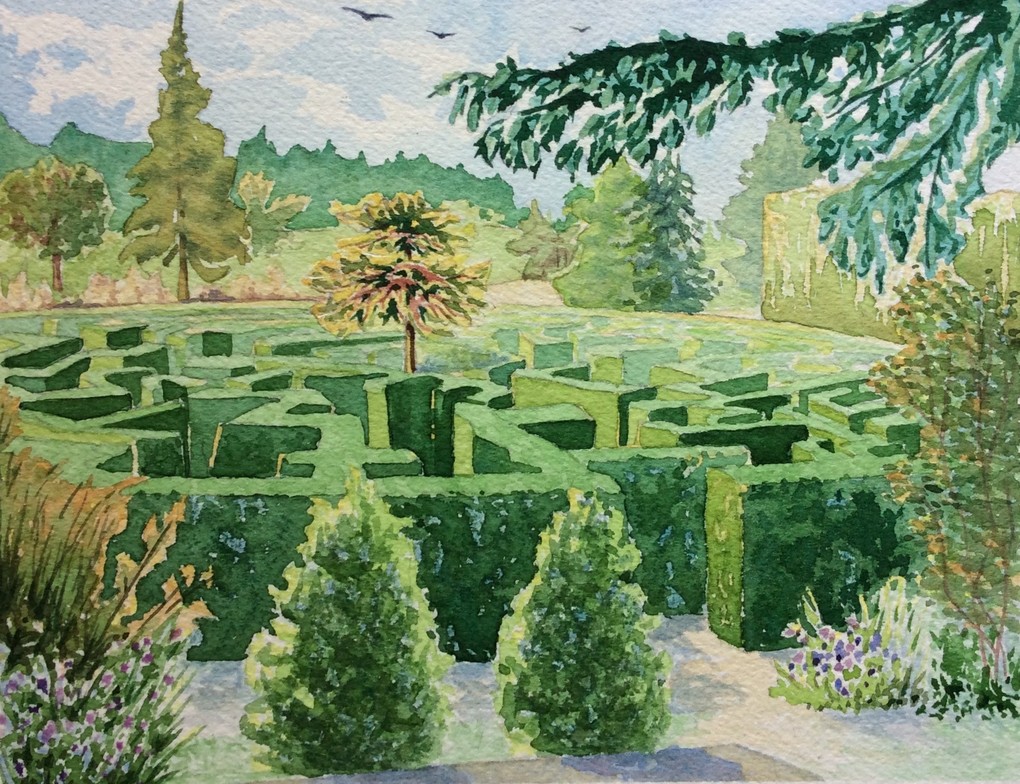 A lot of people pay good money to get lost in mazes—you only have to approach the one in VanDusen Gardens and hear the giggling to know how much fun it is trying to solve the puzzle.  Fortunately, living in this part of the city we are blessed with free entertainment because all you need to do is get in your car and set out, and pretty soon you are in the middle of a maze of road closures for sewer upgrades, services to new homes, or special events.  It can even make coming to church exciting!  One of the old-timers attending a recent event for retired engineers at a Golf Club in Southlands was totally confused, having been turned back by police at every main intersection.  Arriving late, and in quite a lather, he asked if they had a room for the night.

All joking aside, the inconvenience of summer in this city is just that—inconvenience, not a serious threat to life and loved ones that so many are suffering in tragedies like the terrible forest and high-rise fires recently, in cities where civil war has torn the whole fabric of society apart, or in places where bombs and suicide attacks pose a real threat.  I was in Britain during the Manchester bombing, and flying back here at the time of the British Airways fiasco and Southern Rail strike, so saw fear or frustration first-hand, but really admired how most people refused to be drawn into a spiral of hatred or revenge—choosing to stand together, or at airports to sit and lie on the floor together.  Whether it’s holding vigils, having benefit concerts in the name of love, or placing flowers and candles in public places, we saw a huge show of solidarity for the victims of terrorism and violence.  So far it has strengthened people’s resolve not to be reduced to an eye-for-an-eye mentality. I’d like to think that Christian values are helping steer this in countries that not so long ago saw a religious revival in the face of Great Wars, and where historically when things have got really bad people have turned to faith.  Hopefully, folk of other faiths can stand firm in the peace-loving strands of their own traditions, to help build better relationships through the core values we share.

The fact that often history repeats itself gives me hope, because it is precisely when things seem to be going somewhere very hot in a hand-basket, that people of goodwill can come together in a critical mass and find the courage to resist evil in its vilest and most violent forms, or in an insidious kind of collective apathy that leaves folk feeling hopeless, helpless and lost—having no direction and nothing to cling to.  Both Jesus and Paul lived in horrid times when the Holy Land was annexed under Roman rule.  The foreign army that kept the peace by brute force was funded through crippling taxes on subsistence farmers and folk who couldn’t afford the costs of keeping all their religious laws and traditions—leaving that in the hands of an elite few.  Jesus preached against the abuses of power and lack of understanding that separated the rich from the poor, and top end of the religious hierarchy from ordinary folk who did their best to fulfill their obligations without much support, but instead were criticized and condemned if they fell short.  No wonder When he saw the crowds, he had compassion for them, because they were harassed and helpless,... and said to his disciples, “The harvest is plentiful, but the laborers are few, therefore ask the Lord of the harvest to send out laborers into his harvest.”

But first things first, the first priority was to pray—to ask God for help and take time for spiritual self-care.  It was only after that he sent out his disciples with nothing more that their faith and reliance on the hospitality of others to expand his work.  Significantly, two of the twelve came from opposite ends of the political spectrum—Matthew having been a tax collector so in effect a collaborator with the Romans, and Simon the Zealot, a member of the faction known for using guerrilla tactics in trying to oust the Roman presence and rule.

If we take this as a model for ministry in times of catastrophe, confusion and change that leave folk feeling lost and cut off from the support structures like the church that used to provide stability and sense of solidarity, then our first job is to pray for laborers who will go out to help bring in the souls ready for something to give their lives meaning—those ripe for the Christian hope we have to offer.  With millions searching for meaning, help and peace, we have a critical role to play in the work of everyday evangelism—proclaiming by word and example the good news of God in Christ.  St. Philip’s has a great reputation for doing this, setting an example through its outreach and by being welcoming, and when it comes to offering a word of comfort or encouragement Christ can count on us.  But if a lack of knowledge or understanding about what our faith offers in today’s world, then this is the time to talk it up for the sakes of those Christ had compassion for—those feeling harassed or upset by the constant bad news in the world, or folk needing a friend.  But firstly we need to focus on spiritual self-care by practising whichever tried-and-tested method we prefer.  Many people pay big bucks to learn mindfulness, meditation or techniques to help them relax and find the strength to cope, yet Christianity offers them all—for free.

A week ago I was at a one of those posh multi-course dinners of minute portions with wine-pairings.  Seated with strangers who were in the property market helping moneyed investors from overseas snap up properties, I felt like a fish out of water.  To be fair, they were delightful companions and I learned more about different mindsets and cultures in those few hours than years of fake news and false impressions had taught me.  However, as time wore on I could not help wondering if there was more to their lives than a passion to talk business and do deals, so during the dessert I asked what they and their clients ultimately hoped to achieve, if they were happy, and what, if anything is missing in their lives.  It was like a dam-burst and turned out that behind the veneer of success were heart-rending stories about the extreme poverty they’d known and struggles they had overcome, but now at middle-age they still hoped to find the inner peace, love and community we may take for granted.  By the time coffee came around we were happily chatting about church and how it brought stability in our lives when my husband and I were busy up-and-comers needing a still point amidst all the ups and downs of business success, setbacks and disappointments, asking ourselves what’s it all for?  Clearly, we had a lot in common.

We probably all share the need for good news to keep us going in the midst of all the bad news we hear—good news to cling to through all the challenges we inevitably face in life, and good news that has a lasting quality, not a band-aid—something that provides a still point and constant hope.  As Paul wrote, friends ...we can boast in our hope of sharing the glory of God and boast in our sufferings, knowing that suffering produces endurance, and endurance produces character, and character produces hope, and hope does not disappoint us, because God’s love has been poured in out hearts. Because of that love, we have so much to offer—and it’s free.  So please take full advantage of it, and don’t be shy about sharing it.