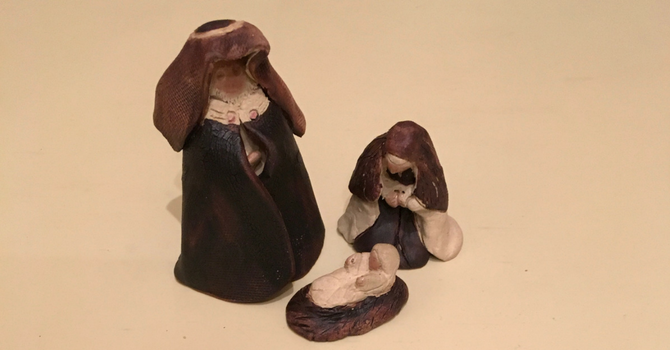 I just hope they do the right thing! she called out, although the look on her face suggested quite the opposite as she barged past in her billowing black cape— aunty Gwynneth adding her own brand of gathering gloom to the dark, wet winter afternoon.  Something bad or shocking must have happened, because there were my other aunties huddled over our huge cauldron — like teapot by the fire like a scene out of Macbeth — two of them dead-ringers for the parts.  Banished to my bedroom without so much as a greeting, a cuppa’ or couple of biscuits to keep me going, or even asking how the day’s exams had gone, with just Latin left before the Christmas break, I left them to it.  Still, it’s hard to concentrate on  amo, amas, amat, amamus, amatis, amant... with rival incantations and refrains like No, never, really? floating up from below.  Finally, when dad come home from work, I was summoned to say good-bye to the aunties who seemed to regard me as some kind of freak in my distinctive scarlet and black school uniform that branded me as a scholarly type.  Eyeing me up and down Flossie said I doubt you know anything about love dear and never will, dressed like that!  I do so I said, feeling my face turn bright red to match my flannel blouse and thick, scarlet stockings.  I know the perfect and imperfect, the past, present and future tenses, but starting to recite them, probably didn’t even reach amabo, amabis... before they disappeared down the path, and I turned to see my dad smiling.

Well, he wasn’t smiling long when he heard that my young cousin was pregnant.  Attitudes have changed, but the fact she was only fifteen and did not know who the father was, would still be disturbing—wouldn’t it?  At least she didn’t face a stoning or shunning as Mary could have if Joseph had insisted on the strictest interpretation of the Law.  But, like Mary, even if the scandal could be hushed up, fifty years ago my cousin could have faced a tough time as a single mum.  Expecting my dad, a devout member of the Plymouth Brethren, to explode with righteous indignation and rant on, spouting oracles of doom like Isaiah or one of the more rabid prophets of old, (a transformation I had witnessed a few times), he just went very quiet, and for the rest of the evening barely spoke, but sat thinking—praying.

My uncle, on the other hand, tracked down all the possible suspects and soon afterwards we received a wedding invitation.  We went, but I cannot forget the forlorn atmosphere in that old, cold country church that broke into total confusion when the door burst open just as the priest asked whether anyone knew any reason why the young couple should not be married, (my cousin being now sixteen and eight months pregnant).  Talk about timing—a man in military uniform strode forward to claim his fiancé for his wife, (a secret arrangement she had been too scared to share), despite the fact he’d been serving overseas for a year and definitely was not the father of her child.  Better than the stuff of pulp fiction and penny romances, this real life drama seemed almost Biblical—a modern retelling of Matthew’s story about a man who discovered that the girl he was engaged to was carrying  someone else’s child, yet despite any initial doubts, any sense of anger, hurt, insult and shame, or desire to quietly put her aside and walk away, he had decided to marry her, following the mysterious prompting of his heart, loving and protecting both the mother and baby who he then raised as his own.

As signs of unexpected joy and saving grace such amazing events and people signal new hope, and new life—as indeed every baby should, just like the one Isaiah talked about, just like Jesus, and like each one of us who started life as babies too and can also bring good into the world.

We are told that an angel spoke to Joseph, but while he still had a choice, like Mary, he decided to be faithful to God’s call to do something different—something daring that would let the limitless love of God be revealed through them.  Not that angels solved all their problems—Mary’s would have just begun once her pregnancy became known, and Joseph faced the kind of dilemma that many of the first Jewish Christians faced in trying to do what was right according to the Law they revered, while also fulfilling the spirit of the Law by going the extra mile in loving their neighbours, in forgiving others, turning the other cheek, loving their enemies and putting aside all anxiety—almost mission impossible, yet the miracle is that they gave it a go, as have millions of others.  You see, along with such lofty, godly standards that Jesus himself demonstrated, also comes the love of God and the promise of forgiveness when we fall short to help us up and grow.

I wonder if Mary and Joseph, my cousin and the man she married all applied the litmus test of love in their decision-making—not only romantic love, but the costly, sacrificial love, Jesus went on to demonstrate—God’s love. I also wonder who told the soldier about the baby—if an angel intervened.  Dad remained silent on the subject, but I had my suspicions since he used to say: Prayer prompts action.  It puts ideas in our heads—possibilities we might not have considered, then gives us the strength to carry through.  However, having done what we not only think right, but believe is for the best, we have to hand the final outcome back to God.  No matter how well or heroically we behave, as we try to cooperate with God’s plan to redeem the world that is bound to stretch our imagination and boundaries.  This means that trying to do God’s will helps us to overcome the limitations of our own preferences, prejudices and pride, to embrace folk we might have ignored, enjoy broader horizons, dream bigger dreams.  Of course, in doing our best, most of us still fail at times, but the Good News is that we only have to make a start in life—we have the whole of eternity to get it right!  The story of Mary and Joseph shows how God works through people, while the story of Jesus reveals God among us—saving us from the hurts we suffer or may unfortunately cause through constant forgiveness and love.

When we talk about Jesus, actually we are talking about God.  Matthew explains that the name Jesus means He will save people from their sins, but in case we think that this hope that came into the world at Christ’s birth has fizzled out, we are reminded that this promise lasts forever, or as the Risen Christ says at the end of Matthew’s Gospel I will be with you always.  Like God, whose constant source of goodness and love has been known in different ways and by different names, Christ is also encountered in many ways from the words of scripture, the sacraments, in people who offer or need help, through hospitality and in our hearts.  Hence the name Emmanuel—God is with us.  He was not the only baby called that—centuries before Jesus was born, another young woman was expecting a child who the prophet called Emmanuel as a sign for Ahaz to trust in God with us so let faith in God shape his decisions instead of trusting in his political power and following disastrous foreign policies.  You see, God’s presence, like Christ’s is not limited to a certain century or season of the year, nor sentimental stories or to the Biblical characters you see in our beautiful stained glass windows.  God is present in everyday life.  In ever baby, every person we meet God with us, so as we prepare ourselves to celebrate the coming of the Christ-child, let us look around and look inside, then be open to God’s mysterious presence at all times and in all places.