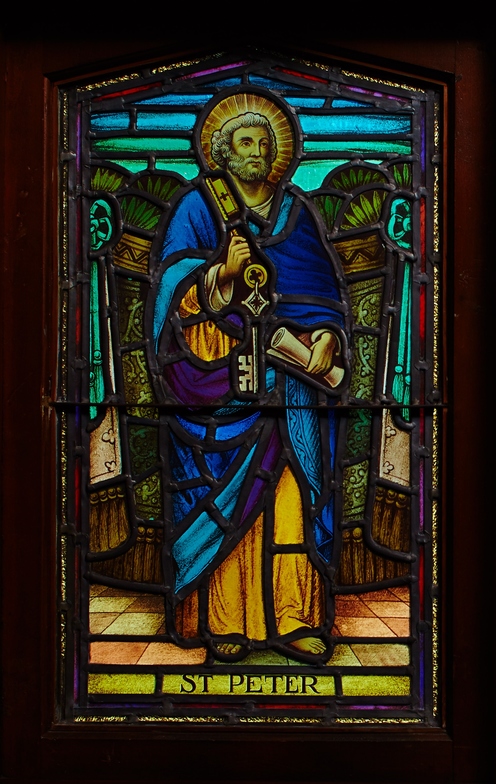 Let the words of my mouth and the meditations of all our hearts, be always acceptable in your sight, O God our rock and our redeemer.  Amen

I.     Introduction “Setting your mind not on divine things but on human things.” Jesus’ rebuke of Peter has resounded through the ages, inviting people of faith to discard the trappings of human life for the elevated life of the divine. But as we struggle to live out our lives of faith, perhaps we might consider a “both-and” approach that allows us to embrace the divine even as we act on our human connectedness.

II.    Peter’s Journey         The rebuke of Peter in today’s Gospel reading stands in a broader context. Peter seemed emblematic of the flawed faithfulness of Jesus’ disciples - eager to follow but somewhat dim in their understanding of the meaning of Christ in the world. On the one hand, as we listened to last week’s reading of Peter’s confession that Jesus is the Messiah, the son of the living God we were inspired by his faithful insight. When the other disciples couldn’t quite bring themselves to confirm who Jesus was (some said John the Baptizer, or Elijah, or a prophet), Peter alone confessed Jesus as the Messiah, the Christ. And we found inspiration as well in Jesus’ response that on this rock God’s church would be built. Noting that both the Greek word for Peter (petros) and the Aramaic word Cephas (which Peter was often called) both mean ‘rock,’ we are invited to wonder whether it was Peter who would be that foundation, or in light of the different gender forms used in the Gospel text, that the testimony of Peter’s faith would be. An auspicious beginning either way.   But then in today’s reading Peter protests against Jesus’ coming betrayal and crucifixion – “God forbid it Lord, this must never happen to you.” Spoken like a true leader among Jesus’ followers. But then, Peter’s bold assertion brings rebuke. Our Savior rebukes Peter for setting his mind not on divine things but on human things. Jesus' depiction of Peter as a “stumbling block” (the Greek skandalos also meaning a trap or a temptation to fall) is echoed later in Paul's comment in First Corinthians that the crucifixion was a “stumbling block” for Jews because it appeared to be the ultimate defeat for those who focused mistakenly on the human scandal of the crucifixion rather than on the divine victory of the resurrection. And so Peter is cautioned (as are we all) against focusing on human things - impediments to finding the divine, temptations to ignore the divine, traps that catch us even as we follow the divine. And so, as members of the Church of God, as pilgrims on the journey of faith, we are left to wonder how are we to set our hearts on divine things not human things.

III.  The Gnostic Challenge         As we consider Christ’s warning not to set our minds on human things, we are reminded of one of the most difficult challenges of the Christian tradition. What is the relationship between the divine and the physical world? Let us remember the tradition of Gnosticism that differentiates between the base physical world of the flesh and the elevated divine world of the spirit. Many of the earliest Christian theologians like Justin Martyr were influenced by Greek and especially Platonic philosophy and wondered whether the natural world was created from nothing by the one God who also redeemed the world through Jesus Christ, or rather shaped from pre-existent matter by some sort of lesser deity (the “demiurge”).  If the latter, then the world of nature could be seen as distinct from and inferior to the realm of the divine.   And so we find in the epistles of Paul for example many expressions of what we might call Gnostic sensibilities, many of which are examined by the distinguished contemporary theologian Elaine Pagel, Professor of religion at Princeton.  Examples include Paul’s letter to the Romans (Romans 8:5): “For those who live according to the flesh set their minds on the things of the flesh, but those who live according to the Spirit set their minds on the things of the Spirit.”     Or the letter to the Galatians (5:17) where we hear “For what the flesh desires is opposed to the Spirit and what the Spirit desires is opposed to flesh; for these are opposed to each other to prevent you from doing what you want.”   This juxtaposition between the physical and the spiritual remained a thorny challenge for early Christian theology. The matter seemed to be resolved at the Council of Nicea (whose creed we pledge each week) that concluded that Jesus was fully human and fully divine – one substance (homoousios) with the Father. Human and divine, physical and spiritual – unified in Christ.   Building on this, St. Augustine later affirmed the complementarity of the world and the divine by praising the value of human culture in the expression of Christian faith. And we too can acknowledge the illumination provided our journeys of faith by the philosophies of Plato and Aristotle and even by more current musings of thinkers such as Cambridge theologian Sarah Coakley and theoretical physicist Stephen Hawking - and by the multitude of human thinkers in between.   So where does that leave us?  Well, we come back to Peter.  who learned that faith in Christ is the first step, but hardly the last. Remember that in the end, after the horror of the passion and the exhilaration of the resurrection, after it was completed, after it was all over, and Peter had returned to his life by the sea, seeing Jesus resurrected he affirmed his faith but was then called to “Feed my sheep.” If you love me, feed my sheep. So perhaps setting our minds on the divine is not about withdrawal from the world, but about faithful engagement with the world.

IV.   A Model for Us All         For what we see in Peter’s journey is not a rejection of the physical world or the cultural or intellectual worlds around us in pursuit of some sort of isolated pietism. But rather we find terms for engagement. Jesus’ rebuke of Peter is about priorities. Not about an “either-or” separation of the spiritual and the physical, but about “both-and” - combining of the faithful and the worldly, the spiritual and the physical, the divine and the human.   For as we set our minds on the divine, we are invited all the more to reach out to our human sisters and brothers to offer solace, succor, and peace. To offer companionship and comfort to those in need. To offer specific and concrete help whether in the form of assistance to refugees, contributions to the Food Bank, knitting blankets, or even Neighbourhood Ministry packets – I can’t help but say however, that we are in need of Neighbourhood Ministry volunteers from St. Philip’s as we prepare for renewal of this ministry this fall. And through all these ministries at St. Philip’s, we help our neighbors find the peace that the world cannot give, the peace that comes from the sure knowledge that God cares and we care.   More broadly our challenge is not to avoid the human world around us but rather to engage that world, but from a perspective that celebrates the divine in our lives. As we continue to pursue the goals of truth and reconciliation with Canada’s First Nations we are invited faithfully to embrace the very immediate, real, human dimensions of this important process. When we read of the effects of words and behavior from the current occupant of the White House, we are invited to step forward and engage with the forces of division, racism, and social exclusion. As we watch from afar the flooding in South and Southeast Asia, in Houston and parts of southern Texas and Louisiana, and closer to home in Ontario and Quebec, we are invited to step forward and engage, through contributions to service organizations and also through more intense scrutiny of the effects of policies on climate and urban development. Setting our minds on the divine so that we may minister to the needy. Setting our minds on the Spirit so that we may engage more faithfully with the human world around us. Setting our minds on Christ, so that we may feed His sheep.

V.    Conclusion And so as we prepare for the end of summer, as we prepare to greet a new school year, a new time for fall projects, let us take from Peter the message that all of us can set our hearts on the divine even as we look after the needs of our world. Such is the way of the divine – if you love me, feed my sheep. Setting our minds on divine things so we can minister to the needs of the human world.

Let us pray: Holy One, we thank you that you have shown us the way to set our hearts on the divine even as we work faithfully to ease the sufferings of our human world. We ask that your Holy Spirit will continue to guide us on this journey. We pray in the name of Jesus the Christ in whom all our hopes are found.  Amen